Last week I shared the journey down, with the bears and beautiful scenery.  A good night’s sleep in a comfy bed was followed by a decadent, and delicious breakfast at Pearl’s Cafe.  The Stuffed Blueberry French Toast and the Signature Colada Pancakes did not disappoint!

I popped out to see if I could spot the fawns Mel had seen on his ‘waiting for Suzan to wake up and get ready’ pre-breakfast walk.  No fawns, but perhaps this was momma doe picking up takeout! 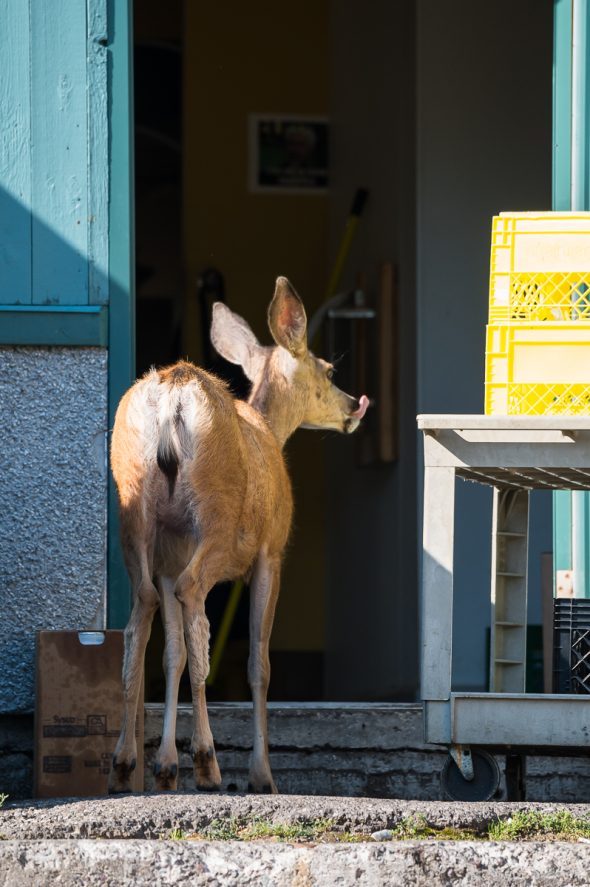 It’s amazing how much there is to do in one small area.  Mel chose to do the Bellevue Prairie Hike with views up the valley – and fewer trees and saskatoon bushes so less likelihood of running into a bear.  As the trailhead is just above the bison paddock, we took a cruise around it first.  A howling ‘Waterton Special’ wind was whistling up the valley.  I could barely open the door to get a slightly better angle through the window. Good thing I had the windowsill to stabilize the long Tamron 150-600mm lens! 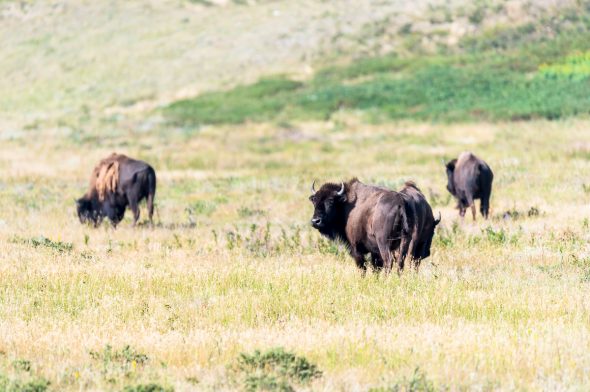 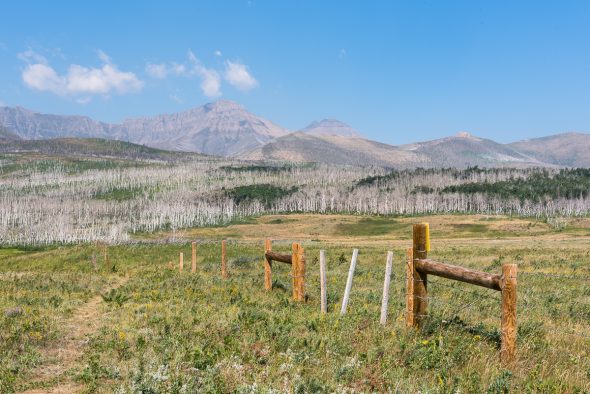 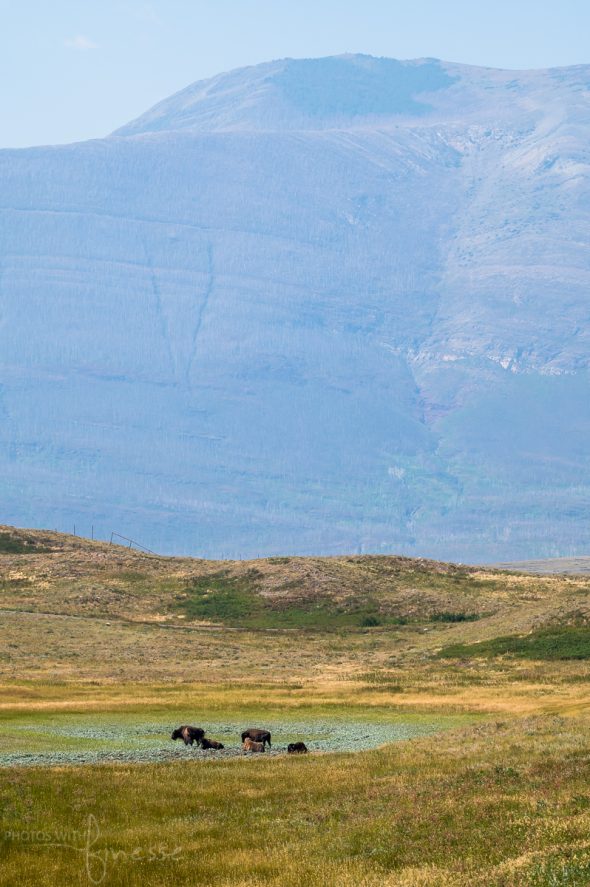 I carried on to Maskinonge, noted as an area favoured by birdwatchers.  Despite the wetlands, I could see and hear birds across the lagoon, but none graced my lens.  And I’m not a patient birder!  I made two loops, stopping at a couple of different places to sit and listen.  The skeletal trees added sculptural interest.  Although the forest fire smoke haze had lifted, there was quite a heavy smell of it in the air. But it was quickly time to head up the Red Rock Canyon Parkway to pick up Mel at the Bellevue trailhead.   I did manage to stop, unimpeded, at the patch of fireweed I’d spotted the night before.  I laughed at the ‘bear’ at the trailhead.  It does look quite realistic as you crest the hill just before it.  I walked the first part of the trailhead noting all the out of bloom wildflowers (still plenty of Liatris, but not much else.) This will definitely warrant a return in spring! 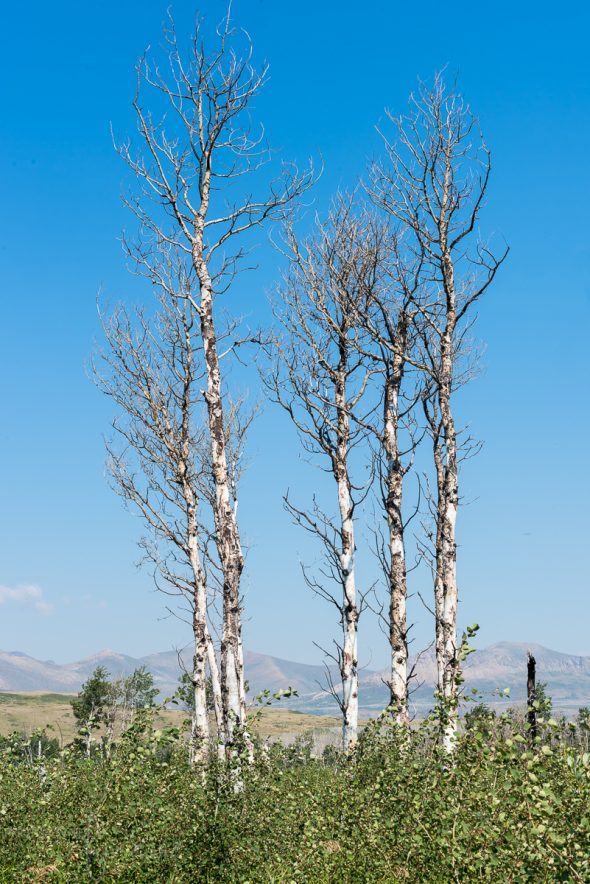 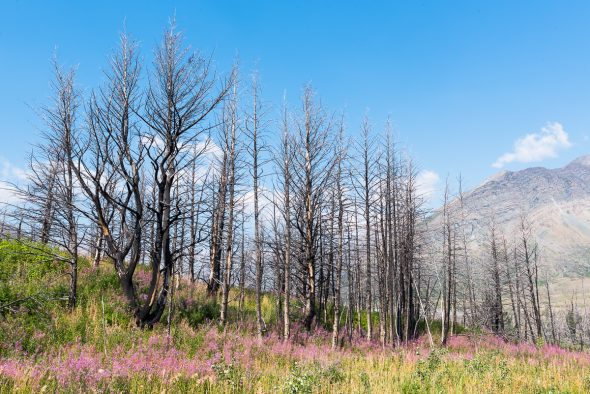 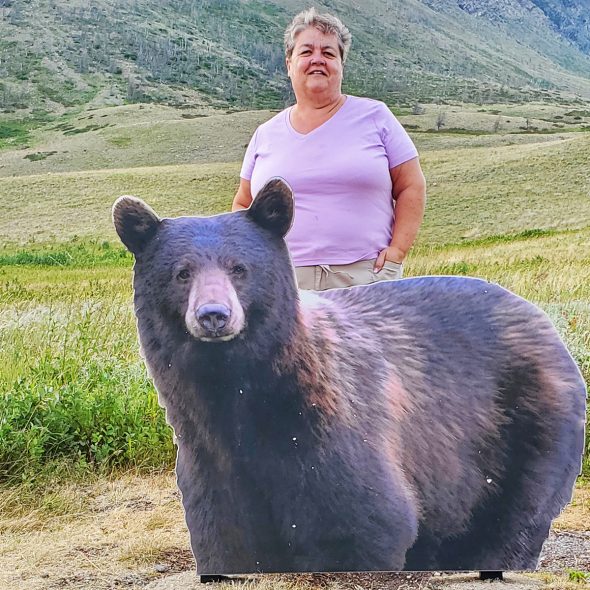 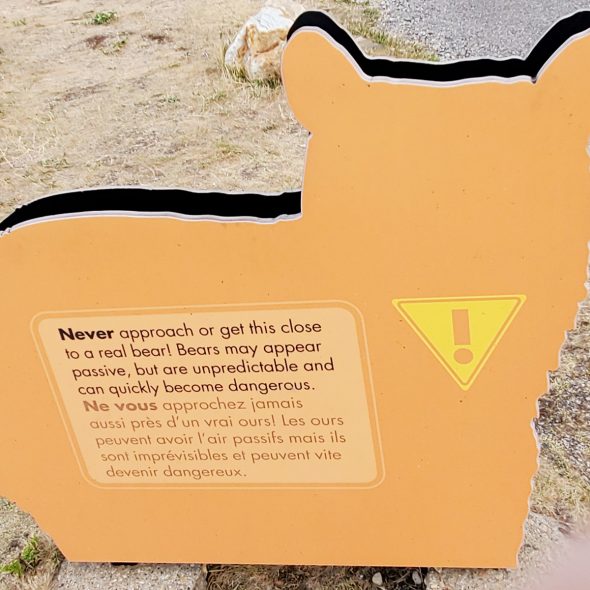 We carried on to the end of the parkway but both parking lots were packed, and there were dozens of screaming kids running rampant.  So, after a quick wander to confirm Red Rock Canyon was still red, and a quick stop to grab some fresh off-the-bush Saskatoons (Mel is now addicted), we headed back to the room for a snack and a time out. 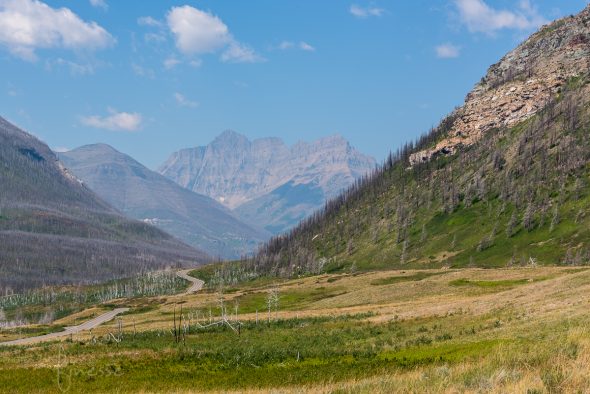 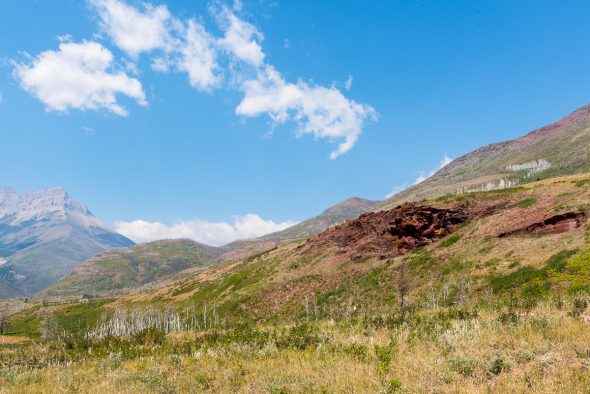 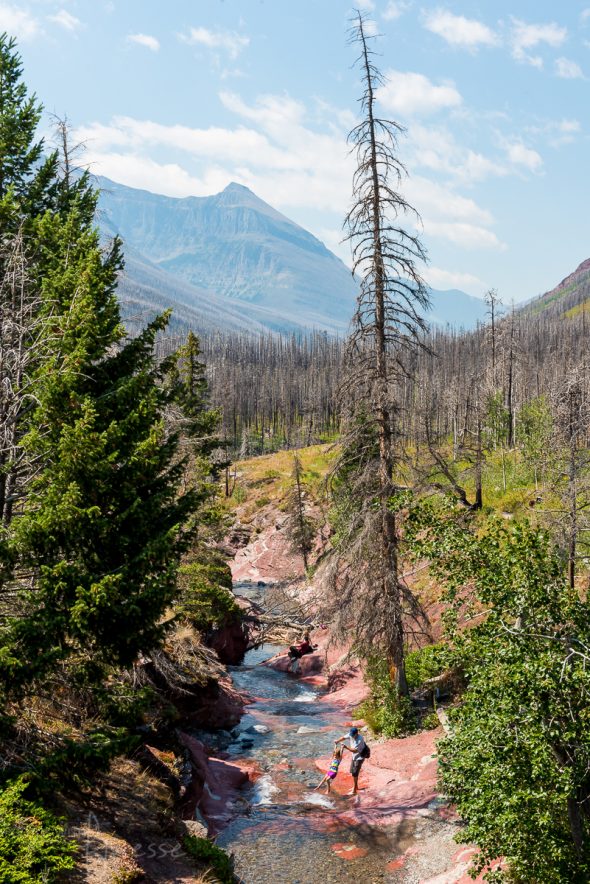 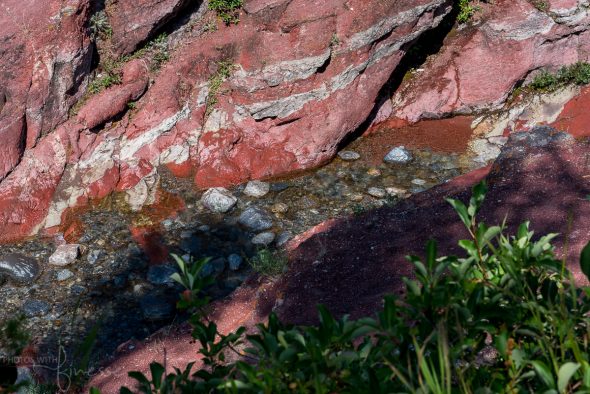 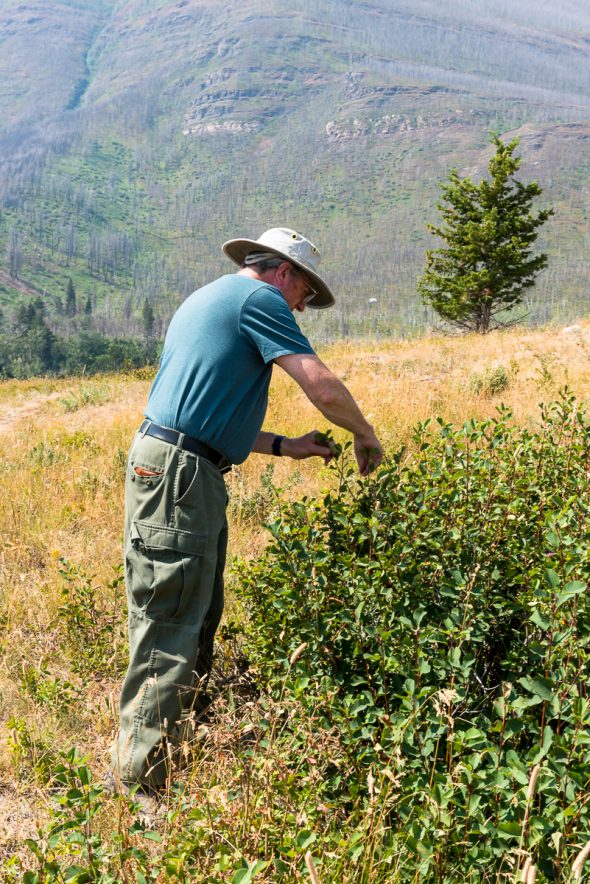 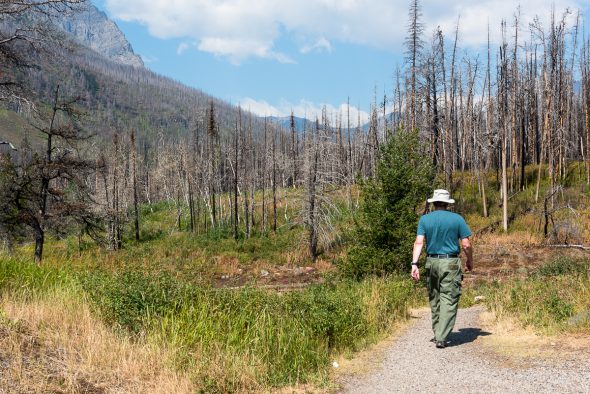 The Cameron Lake Parkway has always been one of my favourite drives.  Rebuilt after the 2017 Kenow Wildfire, they’ve added more pullouts and parking at the various trailheads.  And there are plenty of scenic points of interest on the way.  The higher we climbed, the more abundant tiny white wildflowers became. (I later found out they were Pearly Everlastings)   I’ve always managed to spot a Stellar’s Jay near the lake each time I’ve visited, so I had the big lens locked and loaded. They’re lightning fast though, so did not have high expectations!

Mel happily set off on his paddle down the lake in a rental kayak, while I headed off onto the lakeshore path.  Plenty of signage warned of the possibility of spotting bears in the area as berry season was full-on.  There seemed to be a bumper crop this year.  Some people view those signs with trepidation.  I’m a hopeful ‘yes please! Chipmunks chattered – I think this is a Lodgepole Chipmunk that posed so nicely.  I was amazed at the diversity of butterflies  (and a ‘wanna be’…).  I’ve always loved them, but have never been very good at identification.  (PS. If you’ve never used Google Lens – try it.  It’s amazing – not always 100% accurate on flora, but a darned sight faster than scrolling through website after website of insect ID pages!) Hover over the photo to see the ID.

I can’t begin to tell you how blown away I was by the breathtaking scenery along the trail.  Fireweed blazed in massive swaths.  Raspberry bushes had leaves the size of my hand.  Fallen logs were surrounded by wildflower clusters.  And the wood.  I’m all about the wood!! (Yes, I know how that sounds!) As far as the eye can see, there are fire-ravaged trunks, partially stripped of bark.  The exposed areas gleamed gold where the light hit.  It almost had a polished patina in places.  Likely that’s due to the effects of wind, rain, sleet and snow pelting it.

I couldn’t help but stop here, there and everywhere.  I was getting a lot of comments on the double cameras on my Black Rapid harness.  Not your usual tourist gear!  Still hadn’t spotted, or heard, the Stellars Jay!

And do you remember my ‘Spirit of the Akamina‘ photo?  Well this time I found the Spirit of the Bear.  I feel it’s a tribute to all the creatures who lost their lives, or were displaced, due to the massive fire.

I could go on and on – and share about 100 more images, but I will take a breather.  No damned sign of the Stellars Jay, although, the gals from Parks Canada did have one on their display of birds in the area! We… ok, who am I kidding, I, did restrain the descent down the parkway to 2 stops.   One for this pretty little waterfall, and the other for “OMG, is that a porcupine?”  I mean, come on, imagine it at slow driving speed and tell me it doesn’t look like one LOL.

And we’re nowhere near done yet!…

Yeah – I know – probably should have split this into a third blog.  But hey…. in for a penny, in for a pound. (And yes, that expression is my English blood shining through.) We knew we had a fab meal coming up, but the lunchtime snack wasn’t quite getting us there.  And there was a lakeshore cruise in our very near future. So, what’s a couple to do?  Head over to the BeaverTails shop and split some cinnamon sugar deliciousness to keep us going.

We’d booked the 6pm ‘Wildlife’ cruise via the Waterton Shoreline Cruise Co., ever hopeful we’d spot bears on the shoreline.  We thought if we arrived early enough, we could grab a spot on the upper deck. But the other travelers had the same idea.  We did manage snag one of the last open air ones on the lower deck though.  I’d only brought the Nikon P950, my ‘travel cam’. It’s lightweight, takes up reduced space and is far less likely to brain a fellow passenger than my mega zoom.  So, while we hung over the pier railing I played around.  This camera actually has more reach than the 600mm lens I mentioned early.  To give you an idea, here’s the Prince of Wales Hotel at the widest possible angle, zoomed in about half way, then zoomed in even further.  (I probably could have seen a couple of details in that room if I’d tried, but thought that was a little creepy. )

I was mildly disappointed we were on the newer, slightly smaller boat.  The classic one has my heart.  It’s beautiful with its elongated shape, and meticulously maintained old woodwork.  But the howling wind had dropped to barely a breeze, it was still 24C and there were only a few wisps of smoke being magically backlit by the sun.  (See featured photo at the top.)

No sooner had we pulled away from port than the pilot headed directly across the lake for a bear sighting.  This wasn’t just any bear.  This was a gorgeous blonde with a cub!  (Warning: adorable bear butt forthcoming.)  Good things those boats are stabilized, because pretty much every passenger booked it to the port side to take a look.  The advantage of a long lens is that it shoots ‘through’ people, so finding a gap between heads and shoulders meant I could get a decent shot.  Even if I was one of the shortest there!  The captain also accommodated everyone by doing slow circles. Cubby attempted to wander off, but was returned to Mama’s side for a swim.  Unfortunately that shot was blocked by a cellphone, darn it! Nevertheless, it was still an awesome moment!

After that, anything was bonus… the amazing scenery up the lake.  The International Boundary marker between Canada and the US.  The storytelling which our narrator excelled at.  The history of the area, and the peak names (most of which I’ve already gone blank on, and which I forgot to note down as I was still on bear high!) So join me for some gorgeous scenery.  Picture yourself aboard, and make a plan to go do it yourself one day.  It’s so worth it!

Our reservation that night was for the Red Rock Trattoria. I had a fantastic meal there on a solo trip last fall, and was happy to share it with Mel.  I went ‘light’ – the appetizer size Sicilian Prawns, and Cauliflower.  Mel had the main course version of the Prawns and shared my Cauliflower which was delicious, and absolutely way too much food!  Good thing we only had to roll across the road afterward.

We had a leisurely breakfast in the hotel afterwards. A quick stop down near the shore at the end of the lake, near where the Bertha Trail begins, had perfect conditions for skimming stones, and was calm enough to see the creative heart someone had made out of red rocks.  It was the perfect way to wrap up a fantastic couple of days.  I spotted the fawn Mel had seen a few times, finally.  But some people on bikes spooked it just as I was about to snap.  Oh well.  At least I knew they weren’t town legend!

On the way out, I took a slight detour across Haymeadow to see if there was elk, bear, or any interesting birds.  Grasshoppers – or should I say crickets, perhaps?  A couple of butterflies.  But just as we were leaving the shrubby zone, a flicker of yellow caught my eye and there was an American Goldfinch indulging in thistles.

Decided to take one last trip to the Bison enclosure to see if they were any closer to the lens.  Wow.  We didn’t even have to enter the driving route.  They were cooperatively relaxing in the NE corner right next to the road in!

We didn’t take the most direct route home.  Instead, we hit a cafe in Blairmore for a sandwich, and came up Highway 40 from where it joins into Coleman.  I’d planned to follow it up to the Blue Bronna/Chain Lakes area but got bored with the trees.  LOL.  Last October it was prettier after a fresh 8″ of snow,  and probably because I was more focused on staying on the road, and hoping to hell I didn’t hit a ditch.  No wildlife, and several speeding SUVs/Pickups – some with trailers attached who seemed to think the full width of the road was theirs – forgetting people may be coming from the opposite direction.  We peeled off early to get back onto the 22x which was as gorgeous as ever – and felt prettier, with all the wide open rolling hills.

And that’s a wrap.

All my images are available for purchase. These ones haven’t made it onto the Fine Art page of my website but if you see one you like, please reach out.