Thanksgiving Monday 2021 gave me a lot to be grateful for.  We had plenty of food on our table.  Family to share it with and, despite additional lockdowns returning, still plenty of freedom to enjoy it.  I woke early and felt restless.  Nature called – in the best possible way!  It had been grey and gloomy the day before but I also knew there had been fresh snow towards the mountains.  It dawned crisp and clear.  That prompted a drive to one of my favourite destinations – Forget-Me-Not Pond, in Kananaskis.  Only 45 minutes from my front door, its tranquil man-made lake, and pristine reflections often call my name! It’s pleasantly quiet, especially early morning and evening.  (Weekend daytimes are busier when the family picnic crowds head out.)

I set out with my favourite playlist waking me up, and an XL Timmy’s tea at hand.  The sky was a beautiful rich shade of blue.  Temps around -8C added sparkle to the fresh snow, and a frosty layer to the plants.  Fresh snow capped the evergreens, and Banded Peak shimmered in a cloudless sky. 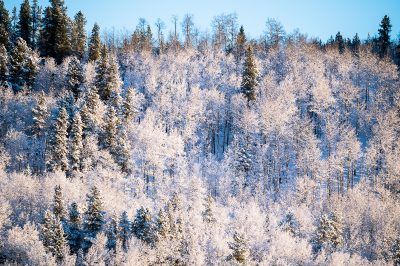 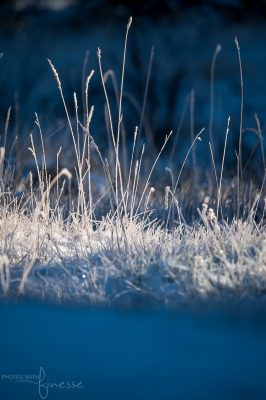 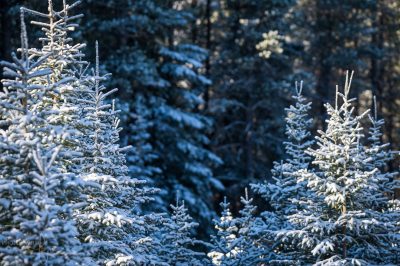 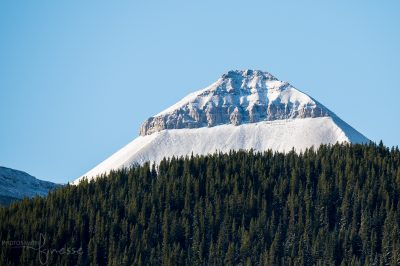 As I hit the parking area, I was delighted to see the band of wildies I’d spotted a couple of times over the summer grazing peacefully in the meadow. Sometimes they’re further up the Powderface Road, or on the Rainy Summit pass.  They cover a lot of ground. The yearling and younger sibling stayed closed to their mamas – one of whom is heavily pregnant.  That, in itself, can be cause for concern because it’s potential for a winter baby – a much lower survival rate.  Definitely keeping fingers crossed!

The frosty sheen wasn’t just adorning plant life.  Whiskers twinkled on snowy muzzles.  I shot a few pics from the car window in case they decided to depart before me. And laughed as the stallion gave himself a good roll, followed by a shake – glad he felt comfortable enough with my presence to do so.  Gentle snorts and soft whickers permeated the air as they pawed down to ground level for their snacks. 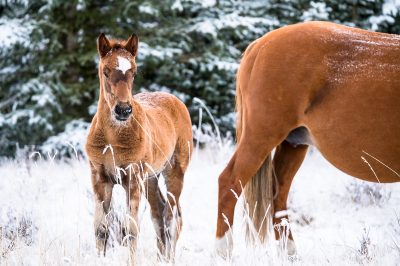 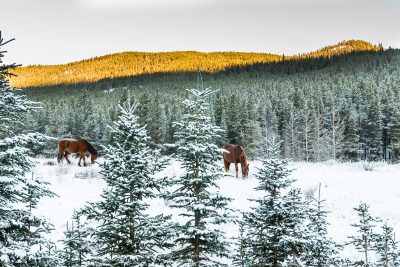 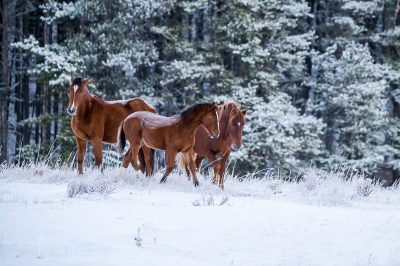 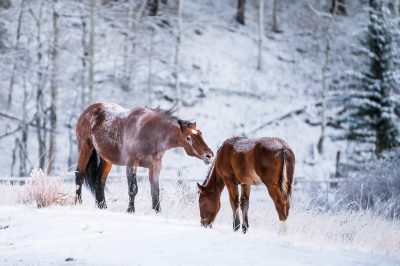 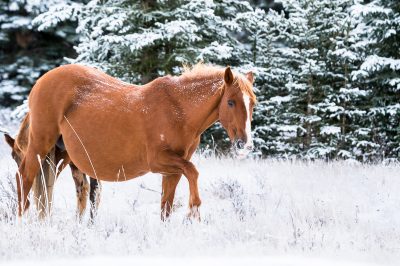 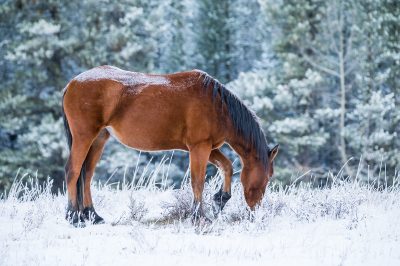 I parked, and said hello to the other couple who were just leaving.  We exchanged pleasantries about the tranquility and perfection of the morning, and they assured me the reflections on the pond were nothing but spectacular.   The hammering of woodpeckers, the chattering of chipmunks, and the occasional chirp of birds provided background ‘music’ as I donned the camera gear.   There was no wind at all.

For the average person, who doesn’t have a camera, the walk around the lake takes about 15 minutes.  Double that, at least, for the photographers! Look closely and you can see hints of ice forming at the edges. The pond fully freezes in winter, and is usually thawed by the May long weekend when it reopens after winter closure. 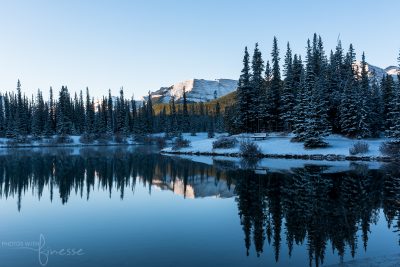 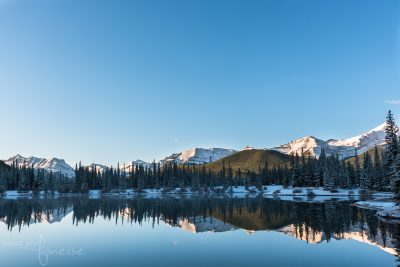 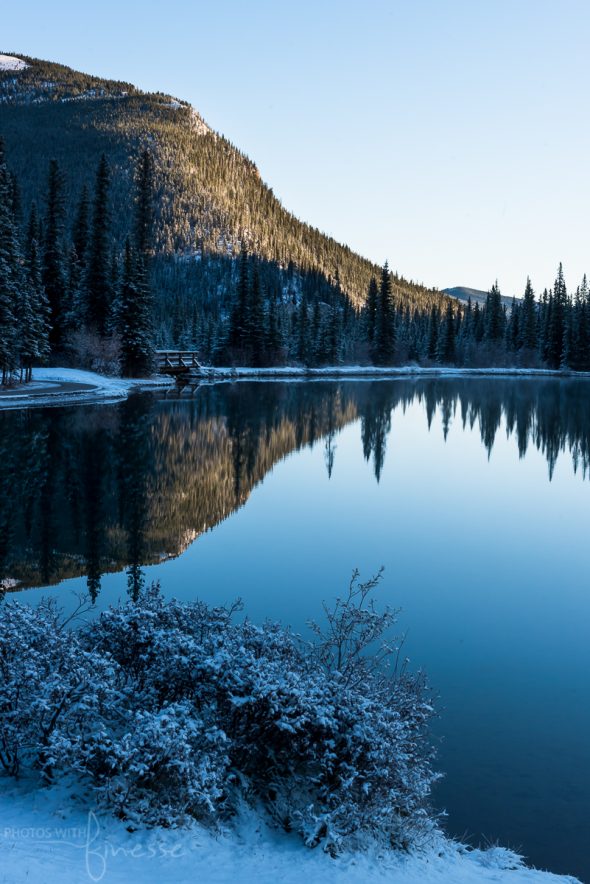 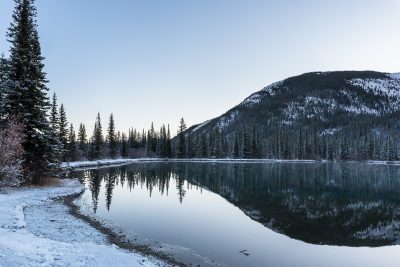 More Wildies – Because Who Can Resist?

I started to feel a bit of a chill.  Could have done with one more layer, so I worked my way back to the car.   I was in time to see another couple jump out of their vehicle with loud squeals at the sight of the horses.  Sigh.  I explained to them that the horses were wild.  That sudden movements could startle them. And that stallions don’t always take well to being squealed at.  They decided to park and go for their own walk at that point.

I stayed for a few more shots.  And added a few curses to the still air as my camera released itself from the harness, to the ground, in a sudden movement of its own.  Fortunately the lens hood broke the fall, I caught it before the body fully hit, and there was no damage.  The sun had just crested the peaks, and the lighting on the horses gave a warm glow.  The babies presented me with their adorable fuzzy tails.  How could I resist?! The one with the blaze is the older of the two.  The frosty gaze of one of the mares was my parting shot as I said farewell, grateful for the moments shared. 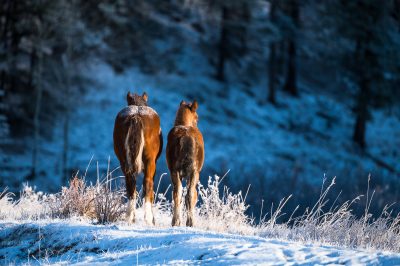 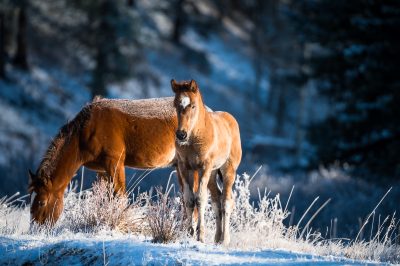 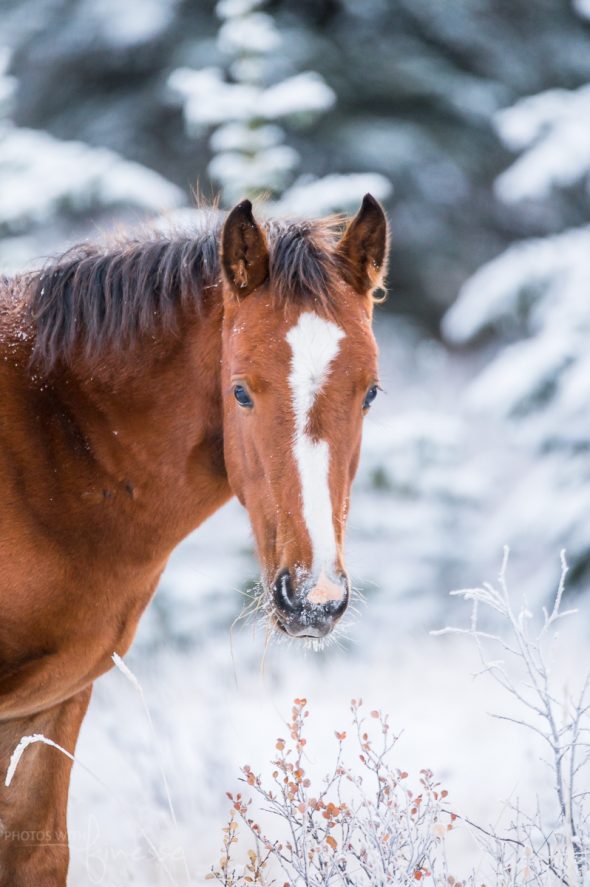 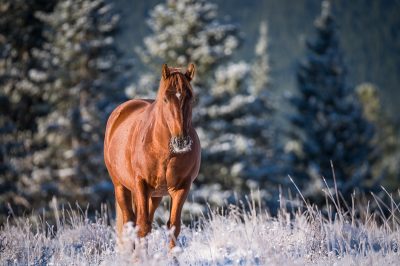 It doesn’t matter how many times I’ve been, I always have to stop ‘one more time’ to check out Elbow Falls.  It hasn’t been the same for me since the 2013 floods ravaged the surrounding landscape.  (The power of water is devastating!) I cried the first time I saw it.  But each and every time I go, I see more evidence of Mother Nature rebuilding.  Never the same, but refreshed.  This time it was punctuated with snow capped autumn leaves.  Parked cars were filling the nearby trailheads and there was more of a people presence.  I was glad I’d been on the road so early.  I meandered up the path back to the car, fully recharged – and was home well before 11am, despite having taken a new (to me) side road, checking out potential future photo ops! 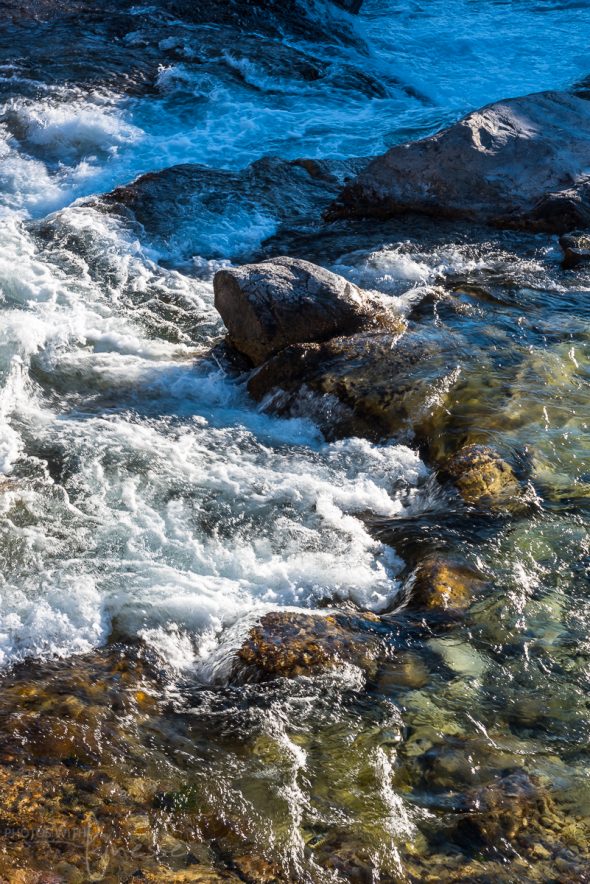 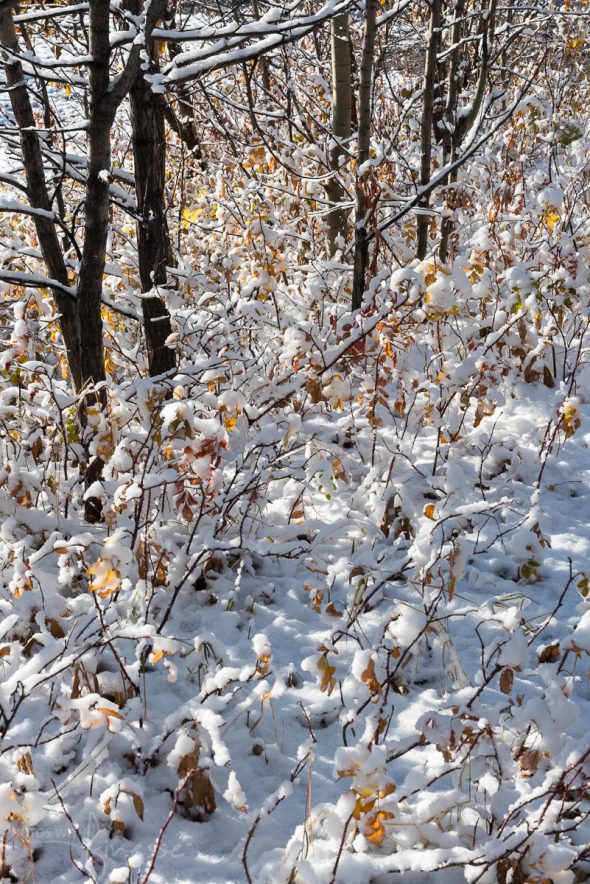 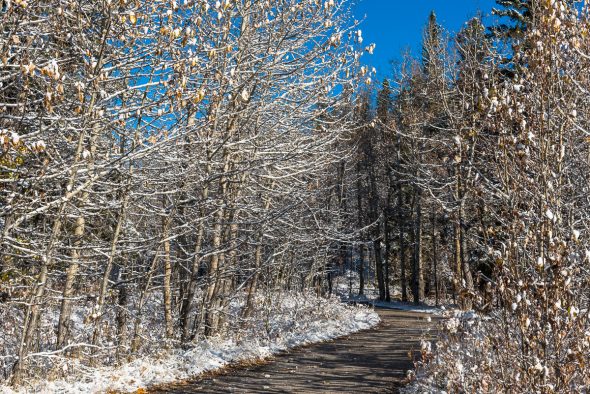 All my images are available for purchase. The ones that haven’t made it onto the Fine Art page of my website can still be purchased.  If you see one you like, please reach out.